For those who are unfamiliar with it, SAS is an industry-standard statistical software used all over the world. As part of the Analytics program I’m currently in, we are encouraged to prepare for and take a Base SAS Certification Exam, which tests one’s ability to interpret and debug basic SAS code on sight, by memory–an incredibly useful skill, since most people writing SAS code are doing so in a dark, underground bunker on a DOS system with no internet access. Wait…

Well, useful or not, I took the test and passed. Now I can be considered among the ranks of the low, low level SAS code monkeys, which is a high honor indeed. In honor of the occasion, I thought “What if I wrote the Lord’s Prayer as a SAS program?” This is what I came up with. If there are any SAS experts out there, I’m sure I didn’t use the most sophisticated approach, so if there are any suggestions on how to improve my code, I’d love to hear them!

Erica and I had to be apart for her golden 25th birthday. However, I put together a gift she could enjoy long-distance–a faux-This American Life podcast, complete with interviews from friends and family, about her life. This link will allow you to download the file, if you’d like to listen to it. Enjoy Erica’s Golden Moments!

Over spring break, we took a road trip down south to Nashville Tennessee, “the greenest state in the land of the free.”  During our trip, we ate a lot of food.  Specifically meat dipped in sauce.  Our favorite rendition of meat dipped in sauce was Hattie B’s Spicy Chicken.  There are 6 levels of spicy-ness: Country style, Mild, Medium, Hot, Damn Hot, and Shut the Cluck Up.  The following is a slide show of Jake eating a Hattie B’s “Hot” chicken tender. Just to give you an idea of how hot we’re talking, I like spicy stuff and Mild was really spicy.

For some reason, the idea of spring break often incites you to go lengths you would otherwise consider ridiculous in order to go on vacation. We fell into this particular whirlpool of reason when we decided to drive to the southern tip of Mississippi to visit Jake’s brother Steven and his family for the week. To be fair, looking back we think it was well worth it; however, given that our car has no cruise control and that we left for the South the morning after driving back from Richmond (IN) at midnight, the 26 hour round-trip drive was bordering on insanity. To our everlasting credit, we made the trip down in one piece and still married (if in name only).

Our efforts first began to bear fruit while we had our first Southern meal of red beans and rice, shrimp cream of creole pasta, and fried catfish (which Erica had caught a few hours earlier in the backyard pond of the house where we were eating dinner).

Throughout the week, we blitzed Southern culture, first with a visit to New Orleans. After a mistaken turn down Burbon street, which was quickly followed by an explanation  of the concept of pornography to 5 year-old Lauren, we basked in the cajun-ness of it all. This mostly involved eating things: muffalettas, beignets at Cafe Dumonde, and a few of Aunt Sally’s pralines. In the words of the immortal James Brown, “it was New Orleans; the city with a street artist on every corner and a string of Mardi Gras beads on every electrical line.” 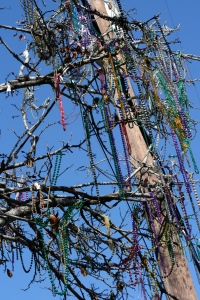 Of course, there we difficulties, too. No rose is without its thorns, just as no Coca-Cola product is without its potential for inducing early-onset type II diabetes. For example, when we visited the beach one sunny afternoon, we decided to go for some local food. Looking down the beach drive, we spotted what looked like the last three letters of the word “cajun” with a picture of an alligator on an establishment’s sign. Hopeful for local cuisine, we started walking toward it. After passing a Waffle House, a Hooters, and another Waffle House, we arrived at the sign. Victory! We were now standing directly in front of Cajun RV Park. We considered shaking down some of the RVs for food, but thought better of it, as we had left our butterfly knives in the car.

Later that night, however, the night began to pick up again. We visited the Ohr-O’Keefe art museum, which was actually quite impressive. But, you may ask, where were the Budweiser clydesdale ponies pulling the Budweiser wagon in circles around the museum? Where was the free popcorn and trio of Budweiser beauties in skin-tight tube tops and heels? Worry not, gentle reader, for they too were all present. Lauren, whose interest in horses had compelled her to ask Heavenly Father if she could “be a horse when she grows up” (I told her that she could do anything she put her mind to), was ecstatic. All in all, it was a fun night. 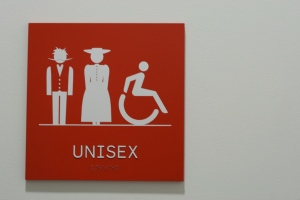 The next day, we visited Waveland, MS, where the brunt of Katrina’s destruction hit. Seeing the naked building foundations and tattered remains of piers was pretty humbling. We also visited the Stennis Space Center, a testing cite for NASA rocket engines and such. Jake’s long-dormant dream of becoming an astronaut began to awaken as the trip went on; however, the space shuttle flight simulator in the visitors’ center quickly crushed it. 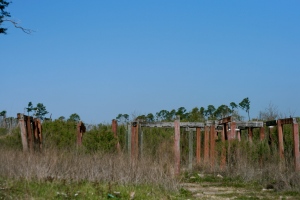